Early in October while walking my dog along a trail that goes by the Agri-Fair grounds, I spotted a little white and black spotted rabbit in this fenced off grassy area. Clearly someone had dumped him/her off…I kept walking but kept thinking about this poor little rabbit as the temperature was getting colder. I went back in a couple of days and spotted him/her again in the same area but then didn’t see the rabbit again for a week or so as it was raining almost every day. Then one sunny day I saw him/her again in the same area. I was with my dog so I couldn’t get too close. I called animal control and they couldn’t help and suggested I try the SPCA. I decided that I would try to catch him/her that weekend. If that failed then I’d go to plan B….

So on a mission I went out Friday at dusk armed with banana, carrot pieces, and a pet carrier. The rabbit was there!! So I crawled under the fence as it was in a locked off area. He/she ran off but within an hour I was able to hand feed him/her. But then as the rabbit got full and it was getting dark, he/she hopped away.

That night I named the rabbit – Francis, after St. Francis of course. I had recently listened to the audiobook version of Chasing Francis. The name seemed especially fitting. And I was even more determined to catch him (although I had no idea if the rabbit was a boy or girl, I went with Francis).

The next morning just before dawn, around 630 I went out again. Initially I didn’t see him so I just waited in the same area. As it got lighter, I spotted him across the road where he was probably staying under some old concrete slabs at night. He hopped over to his fenced in grassy area. He came up to me more quickly and this  time I could pet him as he ate but he was still skittish. And there was no way he was going near that pet carrier. He kept eating and then once again hopped away when he got full. I went home and did some research on how to catch loose rabbits. Everything from throwing a fishing net onto them to using a live trap. A friend happened to have live traps from when she helped rescue feral cats so I went and picked one up that afternoon. It looked rather ominous but thought I’d give it a try.

That night I went out at dusk and Francis was there again! This time he came up to me even quicker and was eating out of my hand. I was had also started petting his back more as I plotted to somehow catch him. But I knew if I went to grab him and missed, he would not let me get that close again for quite sometime, and once again, he hopped away when he was full and it was almost dark.

Sunday morning I went out again (and yes, I was praying to God to rescue Francis). This time I felt more determined to catch him. I knew I would have to act fast, before he got too full and that I’d have to grab him using a towel. There was not going to be any luring him into a pet carrier or live trap anytime soon.

Knowing his morning routine I waited for him as I did yesterday and sure enough he hopped over to the grassy area where he hung out during the day. I started feeding him and petting him and got as close as I could on the ground. I grabbed the towel that I had brought with me, prayed again to catch him, took a deep breath, and pounced! I caught him!!! I wrapped him in the towel as he tried to escape and got him into the carrier. I was so incredibly relieved and thankful. I got him home and he quickly settled into his living space. 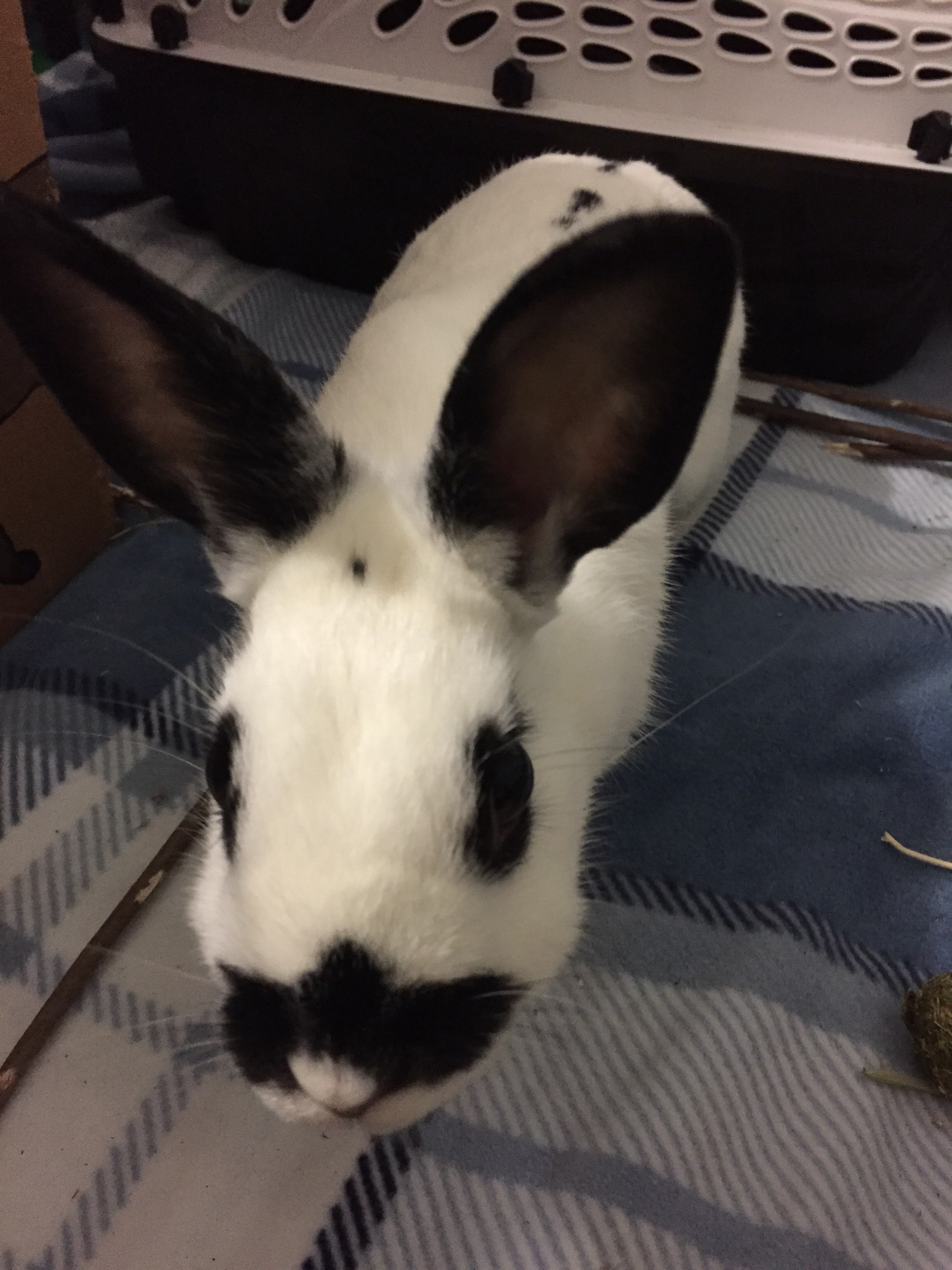 Over the next week, I wondered if I he was a boy or a girl – and also wondered if she could be pregnant. There were lots of wild rabbits in the area….When I took her to my most amazing vet, we learned that Francis was an unspayed girl probably around 6 months or so. So Francis became Frances. I got her spayed a few weeks later. I also through my rabbit research learned that domestic and wild rabbits cannot inter-breed. My next mission – to find her a brother.